This mare and foal moved through the high grass of early summer at a quick trot, breezing by with every turn. Full of energy, the three-month-old baby never stopped moving and its hooves never stood still. Mother Horse, on the other hand, was more interested in grazing but wouldn’t let the little one far from her side. Delicious green grass such as this is hard to resist for any horse, so she would dip her head down and grab a bite on the run.

I don’t know mothering mare behavior in horses all that well. But I’ve seen enough horses stand and graze while letting the foal run if they want to burn off that high energy kid stuff. Then again, it stands to reason some horse mothers might just be more protective like a four-legged helicopter parent. Most of the time, the baby will stay very close to the mother anyway, and they naturally often try to put mom in between them and you.

It was fun to photograph this mare and foal as they spun around the paddock in circles, never stopping. With every round, I’d shoot them going past with the sun at my back. The baby was sort of leading the whole situation with mom following to keep the little one close.

Oddly, they were nearly always in lockstep with the same leg position through most pictures in the series, as seen in Two In Tandem #13722. At one point, I took a risk and stepped right out in front of them to get a different kind of shot as in Two Peas #13358. I don’t recommend doing that even if you know horses as I do, but call me crazy.

These are purebred Arabian horses. The baby was born looking like her bay mare mother, but over time her coloring transitioned to something altogether different in the picture Elegance in White #14371. Some stunning good looks for a horse there, too. 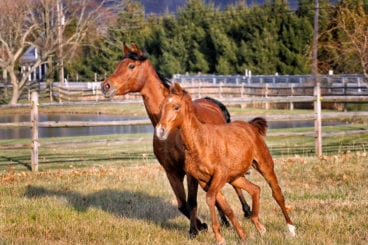 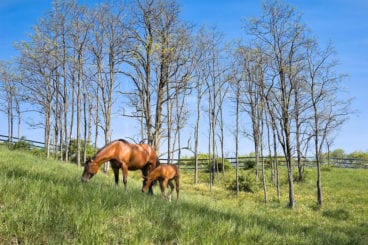