Coming back from the lake with his catch of one fish hanging on a homemade bamboo fishing pole, Jake stops for a cigar break and grins for the camera. It’s a great summer day to be out playing hooky, which Jake can do every single day now that he’s retired. Naturally, it goes without saying that no fisherman of style would be without a fedora and his Ray-ban sunglasses.

The rusty bike is ancient and decrepit but goes along just fine on the streets and back roads of the town of Afterlife. It somehow does this even with two flat and very rotten tires….most peculiar! But that’s how things work around Afterlife, just as you wouldn’t expect them to! No one in living our world of The Before really knows how things actually work in that strange place known as The After, or even why skeletons even go fishing at all with shades on.

And although he died of lung cancer forty years ago, did that stop him from smoking through eternity? Heck no! To each his own, now and forevermore. But even in eternity, one has to keep a lighter handy because the cheap cigars still go out like they used to. Some things never change, no matter where you live. 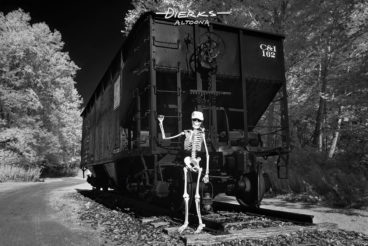