In this abstract piece, a slice of agate reveals curves and multicolored patterns in orange, white, various reds, and even pink. The abstract looks like an aerial photograph of land and water. In my imagination, the shapes and colors seemed like a burning land surrounding a convoluted lake with a pink shoreline.

This was taken from a large plate-sized piece of sliced agate that was photographed in small sections in close up. It was an exploration in micro photography while looking for abstract art using something entirely organic. In this case, the crystal center of a sliced geode.

Agate is very beautiful in its wide range of forms and colors. All agate comes from geode stones found in the earth and these beautiful crystals inside aren’t seen until they are sliced open. Amazingly, geode stones form in small empty voids in the earth left from animal burrows or decayed roots. Over time, nature fills the voids in with crystal as water moves through. So, in fact, beautiful agate is something made entirely from nothing at all!

There’s a companion image to this one that follows the same idea of shores afire. It’s called Frozen Fire Sea #14605. 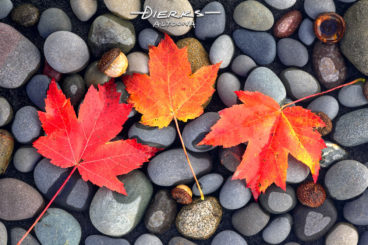