It’s the autumn of 1955 with the trees in fall color, and the Everett Railroad steam train rounds the curve coming into town. It’s an uphill pull to the station for locomotive #11 even with a short train, so the extra work puts black smoke high into the sky. It’s 11:10 in the morning…right on time for the Roaring Spring station stop just ahead.

A new 1955 Chrysler 300 with wide whitewalls leads traffic by the tracks and a freshly washed red 1948 Chevy pickup is parked in front of the local barbershop. Along with the railroad bringing things, there’s Saturday business in town for a lot of folks too. Curbside, the paperboy waits to cross the street while a few passersby stop to watch the train. There’s always been someone who likes to watch one go by, especially a steam engine at work.

There was some fun to be had working with reenactors to make this timepiece photograph, an imaginary step back into another decade a long time ago. The Everett Railroad is a real working railroad shortline with these fun steam excursions on the side. They also had vintage railroad cars to make up a short train and the train crew even dressed in period work clothes. On this day, we also had good luck finding some classic car enthusiasts who had gathered nearby to roll through the pictures to make things more convincing.

Just up the track a short way from this scene lies the old PRR station. There was the chance to work with other reenactors boarding the train there, in period clothes. You can see them and the steam train coming in through the sunshine in the picture called Roaring Spring Station #15265. You can also look over the day’s entire shoot in the Everett Railroad Gallery. 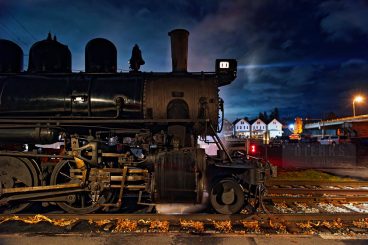 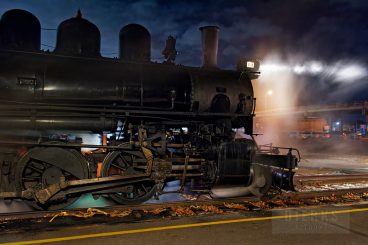