An abandoned gas station in the country with a single gas pump sits here alongside a skinny rural two-lane highway in snow and sunshine. A real throwback to cheap gas, a surprising twenty-nine cents a gallon is the price showing on the face of the old Atlantic gas pump. That’s a real bargain but there are no more customers to be had at that price or any other number! A little forensic dating shows this place pumped its last drop of gasoline around 1970.

Like most country gas stations that were out in the countryside of rural America, this relic is rundown and out of service yet life goes on around and past it. The cars still go by but nowadays people stop elsewhere for gas at far glitzier modern convenience stores. The countryside has been left behind in daily business transactions in many ways. A grape Nehi soda and a Moon Pie from back in the day have fallen completely out of vogue too, as well as a little local BS and gossip with the owner. Not many want something as weathered and wonderful like this relic and a Smithsonian grade artifact.

Legacy gas stations in the countryside are harder and more difficult to find these days. They’re as rare as can be if they can be found at all, swept off into history. Time itself does that work, but one of the things that moved it faster was the strong interest in collecting things like this faded red Atlantic gas pump. The pursuit of all things petroliana can hurt as well as preserve.

You can see the tire tracks of the mailman who has left mail for the house across the road. That’s where the people who used to run this gas station live. As a result, that’s also the reason this place sat just this way undisturbed for 45 years since it closed: those people could easily watch you across their front yard, so they’ll be no monkey business! No need to watch so closely these days because this old country gas station has gone now too. These things are now even more rare with its loss.

Intrigued by this piece of rural America? Here are two more views and other writings about this pretty cool old gas station in the country. One is Roadside Sentinel #5520, the original picture shot on film years ago, and Octane Alley #10226, a horizontal winter snow view. 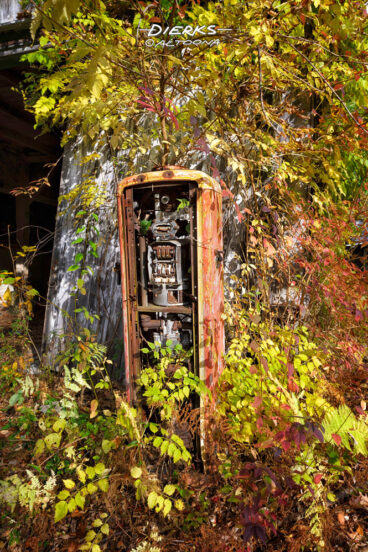 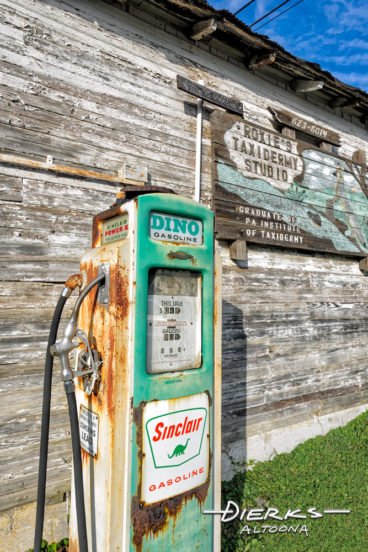