An early March snowstorm had passed through overnight leaving eight inches of wet, damp snow and an overcast yet bright sky. What better time to go out shooting winter scenes? So I headed out in the old truck with a thermos of hot coffee to go, trekking in a miles-wide circle out through the countryside.

Some interesting images were gathered up here and there rambling in the rural landscape. But the best chance for something out of the usual came back in town, within the city limits not far from home. The open areas in any town can be interestingly changed by snow, and I came upon this snow covered cemetery on a narrow and steep back street that splits two large cemeteries.

The cemetery grounds were ringed by an ancient wrought iron fence that was bent and deformed by time, but not as distorted as the twisted old maples alongside the road. The tree limbs had been white-coated by the snow, accenting their broad curves. The hill rose behind to hide the rows of houses just over the crest if I positioned the camera carefully. An old mausoleum sat higher up behind the headstones and monuments that were mounded by snow, giving a good background point.

The winter scene was just right as it was, it was only a matter of waiting for the overcast to thin enough to give good light. Passing cars slowed down to see what the guy with the tripod was doing simply standing along the road beside a snow covered cemetery. But my only task was to wait for the right light and be the object of a little vehicular wonder. Eventually, that light finally came over the graveyard, the shutter release was pressed, and the still-warm coffee was still waiting in the truck.

Care to see a software-derived and unusual variation of this picture? It’s Spook Hollow #12006 and spooky it is. 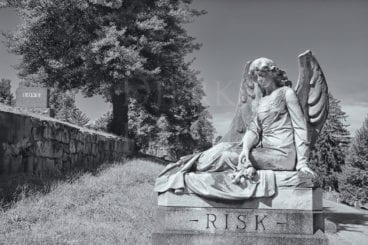