This festive Christmas horse is going along to help Santa this year and I hope those flying reindeer will make room for her. It shouldn’t be a hard job, but she’ll have to stay up all night and cover many miles before dawn! They might have to stop for hay somewhere along the way…

This my old pal Allegra as a young filly. Her owner and I were trying to get a few good shots of her kicking up a little new snow running in a small wooded corral under the pines and tall trees. It was pretty cool and quiet out there, her hoofbeats were muffled moving through the new whiteness.

On a break and just for the heckuvit, we decided to see if she’d tolerate a Santa hat for a Christmas horse picture and a sign of the season. It was fun, she cooperated for a little while and this holiday picture was created. Then it was back to doing regular horse photography stuff and we got a few good ones of this beautiful young Arabian horse in motion.

A little while later, we brought her sire into the corral and tried the Santa hat on him too! He’s the white stallion seen elsewhere throughout this website. I think we got a funny picture in a classic bah-humbug pose for another kind of Christmas horse picture altogether. Have a look at White Horse As Santa #13748 for the Christmas word straight from the horse’s mouth.

Allegra has since grown into a beautiful horse in her own right and still loves to run in the snow. She remains a bit of a camera ham to this day too. Allegra #14370 is a great picture of her making 28″ of powder snow fly on the run! 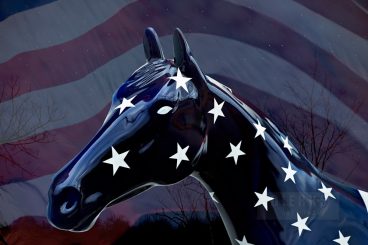