This amusement park ride is a bit of carnival delight called The Toboggan. A colorful old school ride, it made thrills and squeals for quite a long time in an old fashioned amusement park. Unfortunately, the little park was “modernized” and this ride was sold away. Too bad. It was pretty cool for an antique and rather wonderful in my opinion.

I had special permission to shoot in this Altoona park just before those renovations began. Known as Lakemont Park, it was closed with no people around, but The Toboggan drew me right over with the camera and tripod. With all that bright color, it was a visual magnet for this camera guy just as it had been for thrill-seekers for years. Vivid color and some history under a fascinating fair-weather sky…what’s not to like? I had a great time crafting some pictures here with some in black and white too, like Lakemont Landscape #14722.

Like many amusement park rides, this one was visually striking and even looks fun. I never saw it lit at night which would be fascinating and even more compelling, but all the sunlit color fanfare under a deep blue sky with wispy clouds is plenty enough.

The ride takes a funny-looking car of two people up through the yellow center shaft then lets it go zipping in circles round and round down the outside track. It’s not a big ride as it fits on two road trailers set end to end and was meant to be portable, but I’m sure it can pack plenty of G’s coming around that endless corner, The whole way through the ride, your stomach would likely come unglued from its mountings while your gall bladder considers mutiny and prepares to jump ship.

I didn’t want to see this old school amusement park ride go. Hopefully, its new home will be in another park giving rides and not a junkyard, because all it was ever designed to do and needs to do is please people. This is a special machine, one not created for work but for fun. 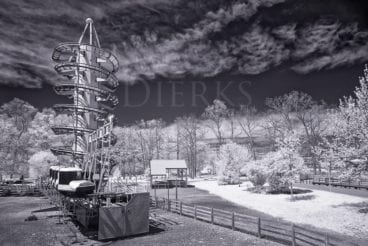 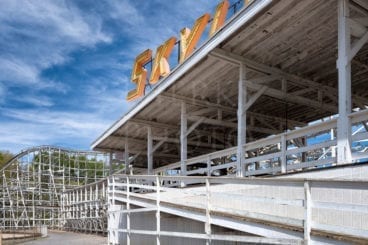