With a bright headlight leading the way, a vintage steam locomotive with bright headlight pulling a train in the winter snow. Trying to get up the grade, a strong white smoke plume goes into the cold mountain air. Chasing along, a skirt of white exhaust steam furls around the engine’s drive wheels.

This old Western Maryland steam locomotive is pulling a freight train of vintage cars. Old in their own right, they are from different eras and railroads but younger than this 100-year-old steam engine. It was all done for a time machine effect on this special railroad excursion up the old Western Maryland Railroad mainline through the mountain woods. It was great to see an old steam train in action, especially going through the winter woods high in the mountains.

There used to be a pair of tracks weaving up this mountain to an aptly named place called Frostburg. You can see the extra width of the roadbed under the snow in this picture.

The Western Maryland Scenic Railroad is one of the few places left to see vintage steam locomotives in action. Being only a tourist railroad these days, the steam trains don’t run every day. You have to check their operating schedule. Other pictures were taken this day, like The Crossing #12980 and High Beam #13365 show more of the visual drama of steam trains running in the winter snow. 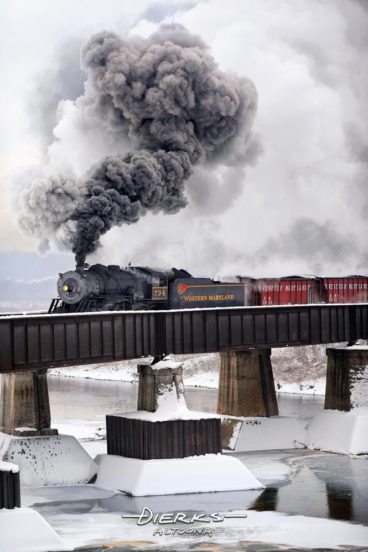