This old yellow maintenance trolley sits in the sunshine amongst the wild daisy flowers popping up through the high green grass and weeds. Today, this streetcar is sidelined and retired with plenty of rust coming through the cheery yellow paint. The imaginary Daisy Street is a short walk away to roughly thirty other trolley and streetcar brethren sitting in the nearby woods. Sitting in this open summer field, this trolley glows in the open sunlight and shows her age spots too. You couldn’t miss it.

It wasn’t always a yellow trolley. Coming from the Boston T Line as shown by the big circled T on the side, it was originally in their standard green and white through its passenger hauling days. Later as it aged, it was made into a yellow maintenance trolley to service the tracks and repair overhead electrical lines. That’s how it became the queen of the maintenance fleet with the safety yellow paint job.

A Better Kind Of Trolley

This type of more modern trolley design was known as a PCC streetcar. It was developed in the early thirties to provide a better ride through the use of shock-reducing rubber components and improved gearing. Of course, that resulted in increased passenger comfort.

The PCC streetcar also offered easier street operation and the basic design went through variations and improvements over the following years. It was a success, roughly 5000 were built and the design was used in public transportation around the world. Yes, there are a few still running in recent years as in Toronto on special holidays, for instance.

In the woods behind this featured Daisy Street trolley, another picture called Old Yeller #14161 shows what a Boston trolley looked like in regular service. They’re on the left of the picture wearing the Boston T Line green with white. Interestingly, the other PCC car in that picture shows yellow as the usual color for streetcars in Pittsburgh on the PAT Transit line.

If you’re interested, more info about PCC streetcars awaits through this link. 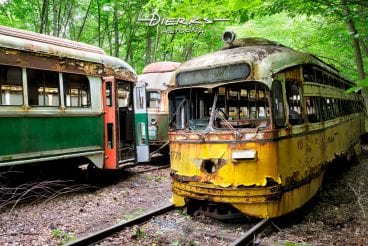