This Arabian mare had been circling the small paddock while enjoying herself ripping up the 28” of fresh powder snow. She would make a fast circuit around to quick-stop in the corner for a moment, standing with head at full height giving a loud snort and making big steam clouds from her breath. It was the horse version of gusto and thrilling to see! Ready to go around again in a moment, she would begin a slow walking roll-out from the corner right toward me. That’s when the shutter was tripped to make this picture.

With her alert look aimed dead-on at the camera, this picture shows some of the power, poise, and physicality many Arabian horses possess. Yet, this is a nice portrait that shows her natural elegance and the shot could even be called feminine.

I love all horses, even the sad sacks and scruffy ones, but this rose gray mare is one of the most beautiful I’ve worked with. She’s a horsey “ten” if there ever was one. Going by the name of Allegra, she is the daughter of the white stallion seen elsewhere in my work. 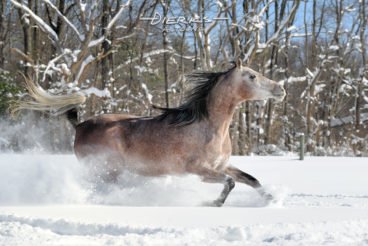 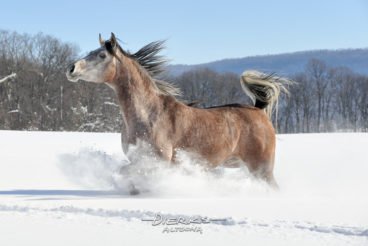