These five wild horses on the beach at the surf line live in Currituck National Wildlife Refuge just above the end of the road in the Outer Banks at Corolla, North Carolina. From that point, only four-wheel drive can take you where these animals roam the dunes as there are no paved roads. You can drive along the beach another 12 miles to the Virginia line, in addition to a few very sandy inroads into the dunes. At both ends there are fences and a cattle guard at the end of the Corolla hard road, to keep them from wandering on the highways to the south and into heavily developed areas.

How long have the “banker ponies” been here and where did they come from? No one knows, but the two best guesses have the horses as Spanish shipwreck descendants or escaped farming horses. The actual answer may be both and more. They have cousins in groups to the north and south through the Outer Banks region, but the enforced isolation has led to a few inbreeding issues.

The wild ponies here are also entirely solid color or bays, yet the horses at Chincoteague in Virginia are mostly paints. All the horses at both locations are noticeably short which makes them more accurately classed as ponies.

In this image, a stallion is leading his harem string of four mares along the wet edge of the waves and threads between the tidal pools left by the low tide. If the string is broken or disrupted, it isn’t long until they reform. Hierarchy is very important to all horses and the pecking order never changes unless there is some squabbling that rearranges it.

Also, notice that no one advances past the hindquarters of the horse ahead, another ritual. Most people don’t know that in the horse world, everything remains very orderly and predictable between hierarchy spats. I’ve always enjoyed watching herd behavior sitting on a pasture fence overlooking domestic herds, but here it was a very interesting chance to watch these wild horses on the beach in their natural setting. 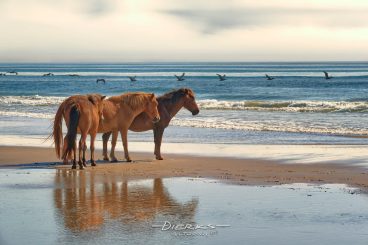 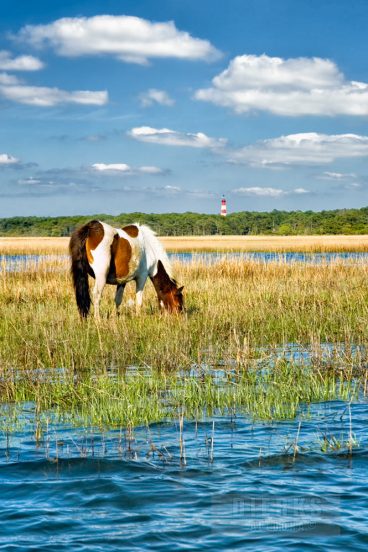