This picture shows a mother and her two kids having summer fun just floating along while river tubing through the Pennsylvania woods. I was photographing the woodsy scenery including this stream off the other side of this rail-trail bridge. There was the sound of some laughter coming from under the bridge so I walked to the other side ready to shoot just for the heckuvit. Eventually, this group of three drifted out from under the bridge.

Having summer fun on the water is always great because it simply does something for the inside of a person. It’s quite magical. Whatever is frozen in there begins to crack loose and somehow smiling and having fun becomes a lot easier…and you move toward joy. So take your pick, there are many ways to be on the water in summer. River tubing is the ultimate easy way to get yourself out there, on it, and in it. Floating on a tube is a poor man’s party.

Unfortunately, the sounds of laughter echoing along the little tree-lined gorge and the indistinct conversation in between is missing in a photograph. Those happy sounds are what completed the moment.

This picture was shot hand-held over the side of the bridge with plenty of speed using a 16-35 lens at f/11 which allowed for great clarity and detail in every leaf and rock. The shot was simply taken off the cuff and not repeated in color. I don’t think color would be the same; black and white infrared made this one better.

I also shot the same scene without the people river tubing in it. It’s nice but once again, the scene isn’t the same without them because the imagination-prodding story is completely gone, the tale isn’t being told. There were four other frames with them in it, but the way they turned here together in a line seemed the best.

Interestingly, there are three distinct layers of trees in this picture and those clouds are from a two-level sky. The wispy one is on a different and much higher level than the fluffy ones. Occasionally this can be seen as a high-pressure and low-pressure system move across one another. The diffuse look of the wispy one is due to its moving along up there.

What About That Title?

That’s an easy one. If you’re having a bad day, think of happy things. The easy laughter of these children having fun on the water would lighten the heart of any troll living under any bridge anywhere, anytime. There’s some more magic for ya’. 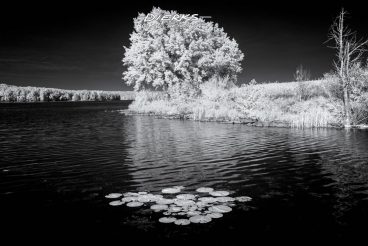 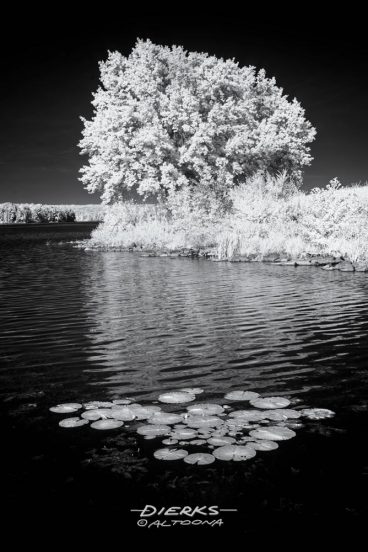