With headlight shining yellow into the darkness, an old-fashioned steam train enters a mountain railroad tunnel as the locomotive smoke boils against the ceiling. Lens flares fly all through the shot.

This steam train in a tunnel was heading in slowly while pulling vintage freight cars during a winter reenactment on the Western Maryland Scenic Railroad. The smoke gathered against the roof and the penetrating high beam headlight split the darkness. Using artistic license to increase the drama, I used special software to replicate the powerful headlight breaking into camera lens flares all over the frame. The railroad right of way was once double-tracked and that’s where I stood inside the tunnel. I was safely out of the way as it went by, seeking a one-of-a-kind shot.

The old steam locomotive soon filled the tunnel with black, choking smoke and I got out of there quickly! You couldn’t see a thing stumbling out of there and everything was covered with a thin layer of black greasy soot and a few cinders. Needless to say, it took a good cleaning at home to get it completely off the camera and lens. This was clearly a one-time effort to shoot a steam train in a tunnel, but worth it.

I spent an entire day with a group of photographers shooting this train in different locations along the sixteen miles of railroad track coming uphill out of Cumberland MD. Always enjoyable, it was a great reenactment of old-fashioned railroading done under steam. The sun didn’t shine at all that cold day and we were pretty chilled by the end of it. As you can see, snow covered the ground and ice had formed on the tunnel walls. Thankfully, the chill turned to advantage because those cold temps are what brings drama to photographing an old steam locomotive by raising big clouds of smoke and steam.

For example, Ghost Train #13013, taken the same day shows just what I mean about the drama of big smoke in cold weather. There’s also a vertical view of this train in the same tunnel situation called Night Train #13366.

The Western Mayland Scenic Railroad runs from Cumberland to Frostburg in Maryland. Today, it’s a tourist line with a rails-to-trails beside it. Curious tourists out for a joyriding afternoon get a beautiful ride up through the steep mountains and back. Interestingly, with prior arrangements, loading your bicycle onto the train allows you to coast the entire way back to Cumberland. This railroad line once continued through to Pittsburgh and the rail trail still does, forming a part of the 150-mile Great Allegheny Passage.

You too can have an enjoyable ride on this railroad while getting the smell of working smoke into your nose. Laughingly, just don’t stand in the tunnel and get too much of it. Follow the link for more information on the Western Maryland Scenic Railroad. 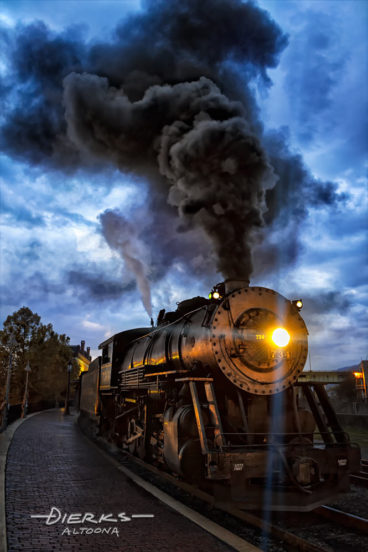