These trees help hold a small rock island together in the middle of the Juniata River against the never-ending flow of water. Photographed from an old bridge on the Lower Rail-Trail, the little island has weathered both high water and low water, as shown here. Other trees that have fallen upstream lodged against it with no effect; it holds firm.  Through time, all that water has passed and not much changes. The flowing water always continues. I can imagine someone a hundred years ago may have had pretty much the same view.

The tiny island is just across and downstream from the bridge center pier. Obviously, the pier has been doing interference blocking for the island for a long time. However, it seems the rock island may have been there originally.

Does it have a name? Not that I know of. Being just the narrowest sliver of land, it’s just too small for a handle I’d suppose.

In the stream bed, rocks are plentiful at this point. Nature landed most of them here, but there are a few exceptions. If you look closely, you’ll see a few have been cut and shaped with corners. That’s because bridge builders have worked here. The two end piers and the single middle pier are made of cut stone from a long time ago. A few rocks worked by the builder men ended up in the river and didn’t go far.

The first bridge here was built in the 1820s for a Pennsylvania Canal aqueduct and used for decades to move freight east and west across the state. Almost eighty years later, the Pennsylvania Railroad built their Petersburg Branch through here, mainly to haul stone from nearby quarries. They used the original end and center piers for their bridge with plenty of modifications to carry far more weight.

Years ago, both the canal and railroad carried plenty of passengers and freight through here over time. If this island was here originally, then it’s been seen and enjoyed by thousands of people through time. Today, a highlight for bike riders on the Lower Trail is stopping on the bridge to enjoy the river view and this scenic little rock island. It’s certainly a great refreshing place to take a break from pedaling!

A nice horizontal companion view of the island is Rock Island #14983, and a color winter view in stark plainness is Slipstream #14890. With all the leaves gone, there you can see the bare bones of the island, what surrounds it, and the mountain behind. 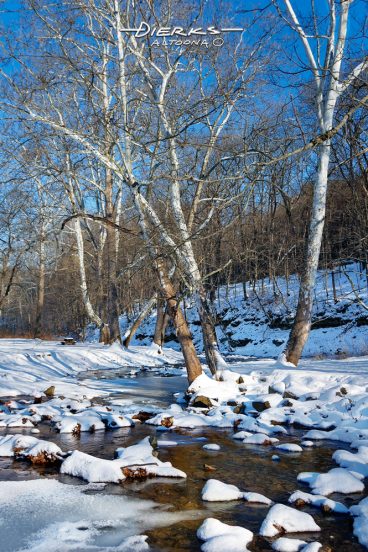 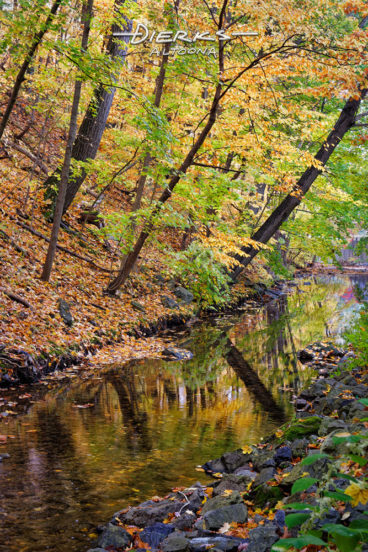