This open and clear winter view of Hollidaysburg PA shows the landscape view all the way to Altoona and the bordering Allegheny Mountains in the background. All the main parts of this old town can be seen with the courthouse steeple and other prominent landmarks. In the foreground, the open railroad area is the original canal basin from the 1830s and a few of the buildings lining that street are from that era as well.  Back in the Mainline canal days, Hollidaysburg was an important stop for freight and passengers going across Pennsylvania. Hollidaysburg was one of the first towns in the area and has a long and interesting history. Today, it is the seat of Blair County.

Taken from Chimney Rocks overlook high above the edge of town, it was a bright and clear day to be out shooting a panorama. Through time, many pictures have been taken from Chimney Rocks overlook since the beginning of photography. It’s a very natural scenic place to photograph from with that high elevation. Panoramas were even created here early on with glass wet plate negatives, probably done by photographers working from a horse-drawn wagon that went up onto the heights. Interestingly, I’ve seen a few of those old Hollidaysburg PA panoramas that were done before the Civil War.

Those older panoramas were created with big wooden view cameras and the images were later physically attached to one another and likely re-photographed for commercial sale. It was skill and ability that made it possible, all besides getting a horse-drawn wagon with your mobile darkroom all the way to the summit! This wasn’t an easy feat to come out right with early cameras let alone a horse and wagon. Later, special panoramic film cameras were developed which would have been used as well. Any method would have been a lot to work through back in the early days of photography.

Nowadays, any town can be photographed in a similar way using a drone to get a camera up high enough, but many won’t compare to scenic Hollidaysburg. It’s very unusual to have the heights of Chimney Rocks right beside town. Most other places don’t have a natural scenic view like this one.

The first hurdle to work through in creating this panorama was getting up there just as every photographer before me had faced. Although there is a clear steep path to follow to the highest view, it was a pretty good hike up to Chimney Rocks overlook. This can be especially difficult through eight inches of fresh snow carrying camera gear. One foot in front of the other is all you can do and work your way up. But the reward of this miles-long wide open view was clearly worth it with all of old Hollidaysburg laid out in the foreground.

I set up and leveled the tripod and added the panoramic bracket, then the camera. Several vertical images in sequence were made left to right to be stitched together in the computer later. Modern digital photography is far easier than the shooters of the past experienced, but every photographer that ever came to this overlook did that long hard hike up to the lookout. And the early ones had a horse-drawn wagon full of equipment to contend with too. I have to hand it to them.

The same panorama in summer can be seen as Hollidaysburg Summer View #14894. There is a nice single frame view of this town taken from Chimney Rocks in winter snow and sunshine is Hollidaysburg Long View #13589. It shows another beautiful day on the edge of the Allegheny Mountains. The Hollidaysburg PA city view in summer or winter is available as a panorama on canvas or metal as 12×36 or 20×60 for home or office decor. 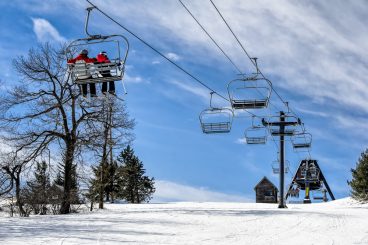