This is the long view down an abandoned old piano keyboard that had been sitting outside for years. Weathering has done its job very well. It was done with a lens set to a very shallow depth of field to focus on the foreground grit and let the rest go into a complete blur. There is only a small area or slice of sharp focus, but enough. This picture is mostly about overall mood and not so much about detail.

This shot was actually Plan B because the microlens was left at home that morning! I never did return with the microlens being pretty satisfied with this effort instead after all.

Surprisingly, I found this old piano carcass standing abandoned in the far corner of a small country truck stop not far from home. Having breakfast there one morning, I spied it out the window. The piano could barely be seen at the end of a truck row. It surely must have ended up there years ago after a midnight dump-and-run mission to simply get rid of the thing. Ask anyone who has done it, disposing of an old piano is surprisingly hard to do.

Yet, with a few guys and a truck, it’s easily done if you’re simply going to dump it outside somewhere. This upright piano had been outside in the weather for unknown years, slowly coming apart at every seam into large and small pieces. Most likely, it was only a short distance from someone’s house parlor to this inglorious end in truck stop mud.

The heat and thaw of the seasons had turned this weathered old piano keyboard into perfect abandoned decay. The plastic covering on the white keys was flaked and chipped off at random. Likewise, rain and snow had split away the black keys at the root and left them jumbled apart like busted bumper cars. Adding to the decomposition, the thin finish veneer was lifting away in repeating waves like the ocean at the beach.

This decomposing piano was a sight of seemingly suspended decay. But like its cousin Rust, Decay never sleeps.

Here’s an image of the same piano the day it was found. It’s called Pardon Me, Your Veneer Is Showing #14737. I’ve been back to the piano several times to try different things following the progression of decay. There have been some interesting and surprising things created. For example, have a look at the very unusual brainteaser picture Mother Nature’s Greatest Hits #13926. 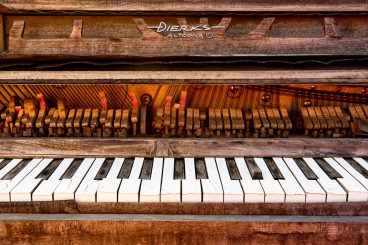