Here is some genuine and grand beauty in religious architecture framing a large pipe organ. Formerly a Catholic church, this Victorian Gothic building has been converted into a social hall and concert venue. Featured in this image is the hall’s resident black grand piano with lid open, waiting for the moment when someone will play it.

The high vaulted ceiling with sweeping arches and the three-door symmetry focus the eye on the large pipe organ in the choir loft. Faux marble, artisan carpentry in oak, and hanging chandeliers set the scene as well. There’s balance, beauty, and symmetry. Not much was spared in making this a strong statement of architecture. Grand indeed, with elegance.

A grand piano is a thing of elegance itself, but the organ is nothing short of majestic. It dates from 1900 and has a 32 rank series with an amazing 2000 pipes! In this hall with great reverberation, the sound of this pipe organ is entirely immersive. You will feel it down into your very bones while actually standing in the music, which is a rare thing. Yes, it is still used and played too.

Through the kindness of the facility manager, I was able to raise the grand piano lid and move it around at will. I did closer-in shots tighter on the instrument, but it also called for stepping back to take it all in. As a result, I did step back a way, set up the tripod once again, and made this composition with a wide-angle lens to take the breadth of the beauty in this place.

Most of the pianos I’ve photographed are abandoned and dead. In contrast, the piano series photographed here are very much alive for a change!

Another interesting pair of pictures of the grand piano taken here are Black Tie #14579 as a black and white hand tint and its companion picture in full color called Invitation Only #14578.

Some Background On This Old Catholic Church

The old church building itself dates from 1908 and was originally a German immigrant parish in the Cambria City section of Johnstown, PA. There were once many Catholic churches in that one small section of the city. In recent times of reduced population there, the diocese consolidated the parishes and sold some of the churches. Two were acquired by a preservation society called The Steeples Project who now runs this spectacular bit of Victorian Gothic architecture as a social hall for rent. 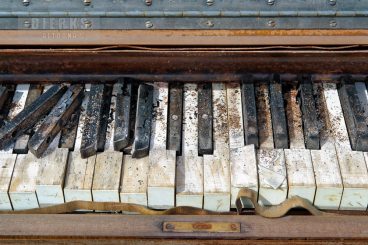