It will run through many scenic places along the tracks, climbing uphill through the hardwood forest to Frostburg, MD. On most weekends while doing its usual job, this steam locomotive pulls short passenger trains full of tourists up and down the mountain. It’s a beautiful scenic ride with the smell of smoke and cinders in the air.

It was a very good day to shoot in the sunny fall foliage. I truly enjoyed seeing and hearing this old machine go by, throwing black smoke along with all the noise. In this picture, I like some slightly blurred motion in the background while the engine and train are in sharp focus. As a little side note, the camera caught the fireman looking at me standing on the hillside across the ravine.

By making reservations, tourists can take bicycles along on the train ride up the mountain and coast back down sixteen miles on the path made from a once parallel second track. This is known as rails with trails. The trail is part of the Great Allegheny Passage bike trail from Cumberland MD to Pittsburgh PA.

Western Maryland #734 is a former Lake Superior & Ishpeming RR 2-8-0 that began operating here in tourism on the Western Maryland Scenic Railroad in 1992. It was built by Baldwin Locomotive Works near Philadelphia in 1916. Not entirely original, it has had some slight modifications to give a more Western Maryland RR appearance, such as the fireball logo on the tender. The tender is also different than the original too, but this old steam locomotive certainly looks good and runs great!

There are other interesting views of this Western Maryland Scenic Railroad train on the website, such as Ghost Train #13013 and High Beam #13365, which shows this locomotive heading into a tunnel. 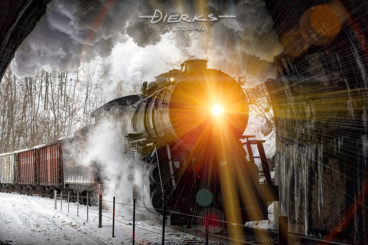 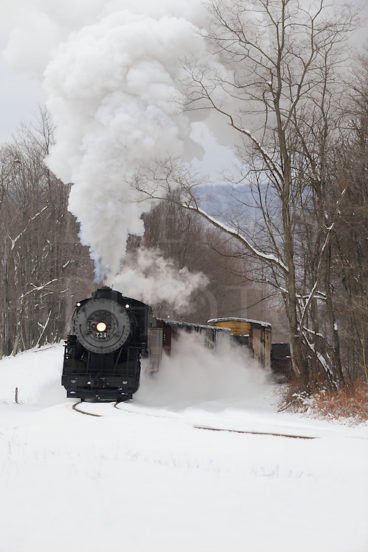