This old time passenger train is being pulled by a built-from-scratch replica of an 1865 era steam locomotive. The entire train is a very close copy of Linclon’s funeral train, the one that carried Lincoln’s casket to Springfield, Illinois, for burial after his assassination. Part of the route that train took in 1865 was on this very railroad line running just south of York, Pennsylvania, on the Northern Central Railroad.

It’s located in New Freedom, PA, and runs ten miles of re-railed Northern Central Railway track that is today paralleled by a rail-trial. This historical attraction was accomplished with York County Parks in partnership with the locomotive builder. Together, they created something very unique that you can visit and ride through some very scenic Pennsylvania landscape. To my knowledge, there are only three of these old replica locomotives in the country.

In this picture, the locomotive and two cars cross Codorus Creek in the Pennsylvania farmland on the way back to New Freedom. It’s always interesting to shoot while standing in water, but this is the way the scene lined up the best! I was also in a horse pasture. They looked at me like I was from Mars and kept their distance.

Occasionally the engine is borrowed by Hollywood for period movie making. It is trucked to where it’s needed, given cosmetic changes to suit the script, and then filmed doing its part. Afterward, the locomotive is brought back to this 1865 Lincoln funeral train appearance and returned to New Freedom.

Historical Civil War weekend encampments are done nearby and reenactors sometimes accompany the railroad operations. It’s then this old time passenger train becomes a true time machine. However, the main freight this train carries is the imagination of hundreds who ride it.

If you enjoy history and live steam railroading, this unique piece of history is worth visiting. You can learn more by visiting the Northern Central Railway website. While you’re there, you can also see their old restored and running GP-9 diesel locomotive.

I hope you enjoy this one. Here’s another picture of this train called, appropriately, Time Traveler #14235.

Try this picture as a free digital jigsaw puzzle! 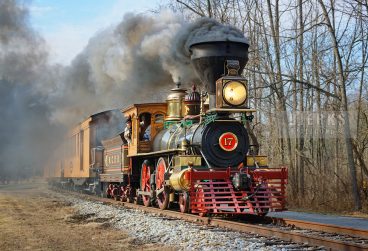 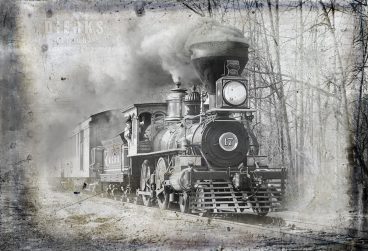