Back in the day, did you ever ride your bicycle down to the old corner store for penny candy? Maybe there were some empty pop bottles rattling around in your basket to cash in, clinking together as you rode along. That’s what I was reminded of coming across this scene, a nostalgic old corner store. This antique bicycle may have been ridden on errands at one time, but here it’s only a nostalgia item sitting outside of this little store. The little bit of rust and a flat tire gives it away, but it was probably someone’s pride and joy at one time. Perhaps even ridden right to this place in red with the old fashioned yellow screen door.

I found this little place while making a big loop around Michigan’s Upper Peninsula after an art show in the lower half of the state. After crossing the Mackinac Bridge, it was many miles through nothing but pine forests along Lake Huron shores to get to this tiny town on the coast. The place was just a few buildings, a marina, and more boats than people. Just offshore, a few private islands were seen with boats moored at their small docks. Sleepy and tucked away, yes.

The little building was once a store and post office but today serves as a tourist info stop and a private residence. The 1895 date can be seen above the door and roots among locals run deep here. At one time, there were far more people living in the area working farms, the plentiful timber, and fishing. The population numbers have sharply decreased over time. That was a world of hard work and effort that not many children wanted to continue. Winters along the Lake Huron shore in the Upper Peninsula can be deep, dark, and very harsh. Consequently, only the heartiest could have made it there years ago.

However, this image is rather sunny, good, and brings good feelings, just as it was the day I was there. It brought back memories of riding my bicycle to the old corner store for penny candy. To see the other slightly darker side of things near there, have a look at Spellbound #12542. It’s an abandoned farmhouse a few miles away. I photographed a few others that were nearby too, evidence of the population having moved away or died off. 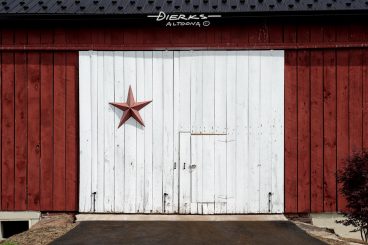