This is a life-sized cemetery statue of a young girl in a country graveyard in rural New York. Who is she? It didn’t say, there was only a surname on the stone behind her. Is this an accurate likeness of the young girl who lies in this cemetery plot? That would only be known to a few people a hundred years on, I suppose. It appears she watches over a family plot in reverence by representing them all, perhaps a guardian angel.

Interestingly, her loosely clasped hands have collected small leaves and twigs which have turned to dirt through time. In her very hands, seeds have sprouted. New life is coming forth from the hands of the symbolic dead! A strange rebirth, but here it is.

Over the years, I’ve sought out cemeteries simply because of enjoying the sculpture work within some of them. I particularly like the stone angels and I’ve been in quite a few graveyards in several different states to find an angel or two. I can tell you from experience it’s very unusual to find a statue like this in a country cemetery. Usually, statutes and commissioned sculpture like this are always in the city graveyards as it were the wealthy who gave their loved ones a significant memorial.

This statue of a young girl was found was through the referral of a woman who saw me selling photography at an outdoor art show near Poughkeepsie. I went to chase it down on a Monday after the weekend show was over. Her simple directions were easy, but she didn’t say it was going to be a thirty mile ride through the Catskills woods! I spent quite a bit of that distance after the first fifteen miles wondering if it was a wild goose chase or I had missed it. Eventually, there was the old cemetery at an old country crossroads with a church, all of it surrounded by woods. Thankfully, many interesting things to photograph have come up through people simply telling me about them. I view it as a gift and I appreciate it.

This is a very well done sculpture enhanced by the deep and dark century-old weathering and staining that particularly accents the hair. The proportions and pose are perfect and her white porcelain-like face has been spared the dark staining. It’s a very beautiful and effective two-tone look very unusual in stone, and only time can give it. There is much flowing detail in the beautiful hair curls and folds of her gown which is a testament to the sculptor’s skill and talent. That’s one of the things I love about sculpture, it’s a combination of both just as is photography. I admire the work done with this statue many years ago.

The image was shot in color but later converted to black and white. Somehow, it seemed to call for that treatment so I went with artistic license here. I then “antiqued” the image by adding a special digital weathered overlay that gives the look of an aged glass plate negative done in Civil War era photography. Specifically, I was trying to recreate what’s known as an ambrotype from that time, but through entirely modern digital means. I still enjoy this image of a cemetery sculpture of a beautiful young girl and the antiquing project came out well. It’s a fact that I keep this one hanging in my place.

If you enjoy the beauty of this wonderful statue, another view without the antiqued look can be seen as Tarnished Angel #09559.

Location: out in the way back of the New York Catskills. Picture and story © Andrew Dierks 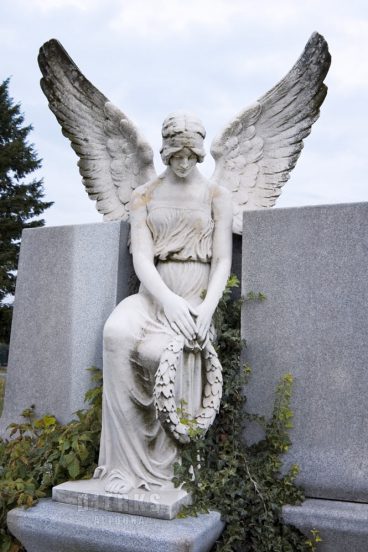