Here’s the endpoint for a rusty and abandoned Chrysler car from the fifties sitting in the winter weeds of a rural barnyard in Pennsylvania. It’s weathered to beautiful patina and the headcloth hangs in tatters on the inside. The heavy hood is cocked open and once shiny chrome has gone to the pocked luster of very dull silver. Some of it has been stained by flowing rust. Clearly, this junkyard Chrysler represents mechanical erosion of the first order.

Equally rough, an old Chevy sedan lines up behind and other cars are set at random in the background like most of the vehicles here. Everything around this barnyard has gone to pot from neglect as the old retired farmer aged into his nineties.

An empty headlight socket has been circled by one of the tall drooping weeds of summer which is now also fading away like all else here. Bare tree limbs add more lost and lonely flavor to the scene. It’s certainly a long waiting game seen here, but waiting for what isn’t known. Really, the only thing changing here is the seasons and there have been many. Is this place where all the bygones go?

I was brought here by a friend who had seen the place from the road. We stopped at the house across the road to ask permission to enter and the friendly farmer’s son gave the okay to let us roam. It was as if time stood still all around the barn and outbuildings and there were about thirty vehicles of all types scattered around, including dump trucks and farm machinery.

Not surprisingly, there was a lot of undergrowth but coming here in early winter we could easily see what would have been normally nearly covered over by summer foliage. The place wasn’t a commercial junkyard that I usually visit, it was just a private collection of things the farmer didn’t want to part with for whatever reason.

Some of the pictures taken here gave me the chance to render them more artistically in muted tones. Much of this image was worked up in hand tinting which added to the long lost feel of the place and it’s fun to add to the character. It certainly hadn’t been visited much at all through the years and it was a unique stop to photograph, a little different than the old commercial junkyards I’ve been to with a camera. Thanks to my friend Paula for the lead!

Turning 180 degrees around from this camera position at the Chrysler car, I made a picture of another old Chevy and a fifties Ford F pickup which I called Wishful Thinking. It’s a cool image that uses some hand tinting too, and in it, you can see how overgrown some of the vehicles were. 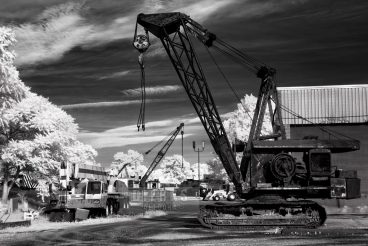