In silhouette on a summer morning, this woman is getting ready to ride her white horse. The Arabian stallion is a little skittish at the barn door and his tail swishes widely. As he tap dances around, the sound of his hooves on the concrete floor resonates almost musically throughout the barn. It’s always a delight to hear. Other horses that live in the barn have already been let out; he can see them in the surrounding pastures and wants to be out there too.

He’s a little excited and dancey because he certainly wants to go riding too on such a beautiful day. There are green trails to ride out through those hills and cool streams to drink from.

Most horses are just like people. They love the chance to go, see, and do while leaving boredom behind. In other words, for man or beast, it’s always good to get off the ranch once in a while!

But before saddling up, she has to calm him down a little before turning the horse to go into the cross ties. She shortens the lead to pull the horse closer while talking smoothly to him, trying to get him to focus on standing still. Eventually, he steadies and stands. The ritual of saddling can begin.

It was interesting to be as much an observer as a photographer while watching this interplay. Looking on, it seemed a lot like a dance between two partners that finally aligned together. I fired off one shot after another in a long sequence across all their movements, all in silhouette in this open barn door. Later, I chose this one of this Arabian horse and its owner along with a few others to show here.

Here is another interesting horse and rider silhouette picture called Getting Pretty #14076 of the same pair that day. Before throwing over the saddle blanket, she brushes his back as the horse’s tail swishes in a beautiful pattern. Follow this link to see the entire Horse Silhouettes gallery.

Try this horse picture as a digital jigsaw puzzle! 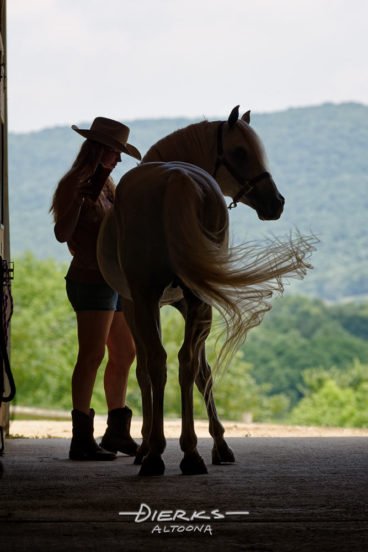