Here is daybreak at the beach on the Outer Banks at Corolla, North Carolina. The title of The Promise comes from the idea of it being a brand new day about to emerge…what good things might it bring? And this one looks promising.

The waves spread out across the beach sand, soaking it, which left parts of it dark in the predawn light. It could almost seem like black volcanic sand on the shore of a Pacific island. I also enjoy the strip of flat retreating water reflecting the colorful peach morning sky light.

During this daybreak at the beach on an early fair weather morning, the still low rising sun and a peach sky reflect mildly on the moving water. These foamy beach waves advanced repeatedly with a slight hiss, then immediately retreated into the next wave rolling in. Other waves even further out await their turn to surge onto the land, one after the other. Soon they too will roll in, flatten out on the dark unlit sand, and keep carrying the wonderful morning sky light from above.

Not long after this picture was taken, there were visitors with me on the beach…click here to see who they were.

Location: daybreak in the Outer Banks at Corolla, North Carolina. 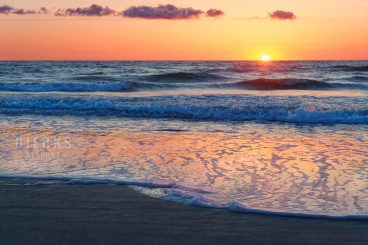 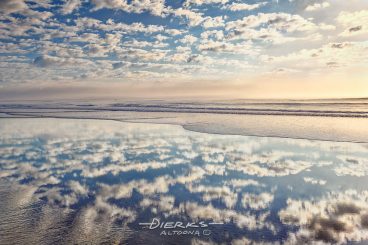