On an abandoned farm in Pennsylvania, a white barn stands unused and guarded by a tall black walnut tree. It’s the waiting season before the winter snows arrive and the fall foliage is almost done. Colorful vines climb the heights of the tree, which has some yellow leaves of its own waiting to fall.

Here in the Delaware Water Gap along the Pennsylvania border are several abandoned farms like this one. They sit on land that was bought up by the federal government in the 1970s to make a large water reservoir for New York City, but that plan fell through. Since then, these farms have sat abandoned yet watched over by federal rangers. The rich arable land around them along the river is still farmed, but no one lives there.

The single two-lane road through the area goes up parallel along the lazy Delaware River. It is simply a land of cornfields, trees, and water for miles. It is scenic, beautiful, and very quiet with little traffic with not a soul around. The area can easily seem and feel post-apocalyptic if you let your imagination work.

No people live in the area, but what once was remains like this barn, a few outbuildings, and some farmhouses. Also remaining, but not as solid as brick and mortar, are the names of the families that were displaced years ago. The names carry on, like this place known as Eshbeck Farm. No one is set to return, but these places wait for them…a second dimension in the waiting game. 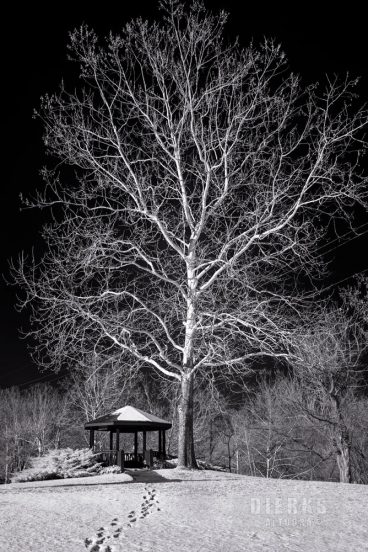