This stout Mack bulldog in close up is on the side of the hood of an old B model Mack truck tractor with a Thermodyne diesel engine, which was simply a trade name used to market with. The B model was produced from 1953 to 1966 in large numbers and various configurations, and many have been restored by Mack enthusiasts.

The B model is likely the most recognized Mack, followed by the R model that replaced it. This particular one was found in a truck graveyard far out in the rural Virginia countryside, parked in a row with many other aged heavy truck brethren including even older Macks, Autocars, Internationals, and Whites.

It was an impromptu rusty and ragged transportation museum that was very faded, with dull green late winter pasture grass for carpet and an overcast sky for a roof. All that could be heard were crows in the nearby woods and an occasional car or heavy truck going by down the narrow country road. The truck graveyard is owned by a multi-generational family that has been in the trucking business for many decades, and they have this specialized heavy truck graveyard to prove it.

This Mack truck had gone through three different paint jobs over time and appears to have been white originally. I really enjoy how the following coats of red and green have worn away in patches and faded to pastel hues in a nearly tropical combination, making some worn industrial beauty that only time can do. 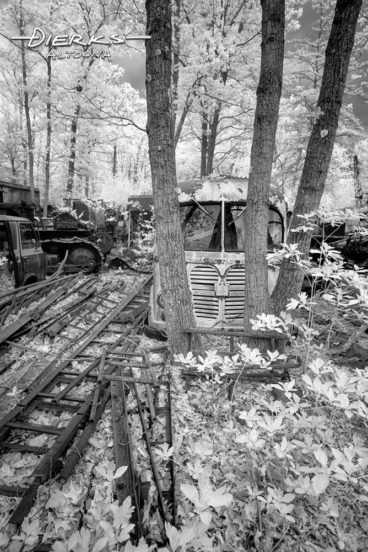 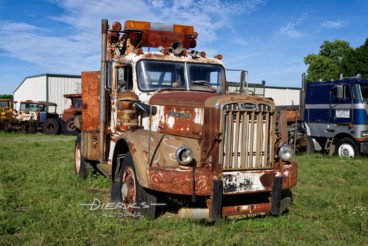