This abandoned farm in the Delaware Water Gap has been closed up for years. Set into the fall foliage on a sunny day, the white barn sits waiting for some far-off revival. The towering large black walnut tree carries colorful vines skyward into the heights and shows a few remaining yellow leaves of its own. It was a big tree but accented further by using a wide angle lens.

Today, the only use for this old place is as part of a good barn landscape. The government maintains it as part of its lands that were bought up along the nearby Delaware River in the 1960s to make a huge reservoir that never happened. All the inhabitants and their buildings had to go, but a few places like this farm still remain from the unfinished project.

It’s very fertile land here along the narrow river bottom and the lowlands have been farmed since colonial times. You can drive for miles paralleling the river and not see much but farmed land and woods. Nearly all human presence was removed by the government back in the day and people only drive through the landscape today. No one lives here for miles.

Traveling through here can give the slightly eerie feeling of a lost land. And it truly is: farm families that were here for generations are who lost it.

Situated not far off the road, it was very quiet here amongst the farm buildings but for the occasional car going by. You won’t see anyone here on foot unless it’s another curiosity seeker or photographer, and I’m sure none of them show up very often. It’s a little odd to be in an abandoned place that is still kept alive and held suspended. The few remaining farms along the long empty highway are kept the way they were, but never changing much. Clearly, this abandoned farm was stuck in time, and time had been stopped nearly cold.

Not too surprisingly, the best time to shoot a horizontal picture is just after you shoot a vertical. There’s another view of this barn landscape called The Waiting Season #14328. 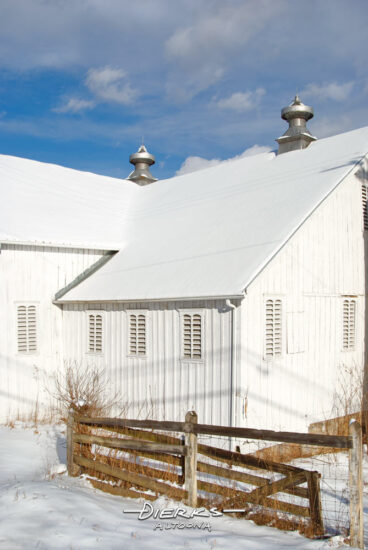