This cut off airplane nose and cockpit came to rest under the trees and on top of this bus by way of a forklift. This rather old scrap metal yard was nearly out of room and bursting at the seams, as they say. I swear this guy never threw anything away. If this hoarder’s paradise couldn’t spread out, it had to go up!

The New Jersey countryside is an unlikely place to find an airplane graveyard, but planes of all types and sizes came in from nearby Fort Dix. As the military transports and smaller jets aged out, some ended up here. Of course, they had to be whacked into pieces small enough to be hauled to the yard by truck.

A hoarder’s paradise, most of the thirteen acres of ground was littered down to the edges of the narrow, tightly packed paths with any imaginable thing made of metal. The paths threaded around the taller stacks like a rabbit warren or a complex maze; the sheer density was surprising. Tricycles and lawnmowers, cars from the forties, old cranes, anything large and small, you name it. As you can see, even the junk school buses were packed to the gills with stuff!

But the highlight of this over-stuffed scrap metal yard was these large airplane pieces made of aluminum which were certainly a high and interesting curiosity.

If you care to see the entire airplane graveyard gallery, it’s right here. Just for fun, I’d bet this airplane nose would have made an absolutely wonderful playhouse for kids! 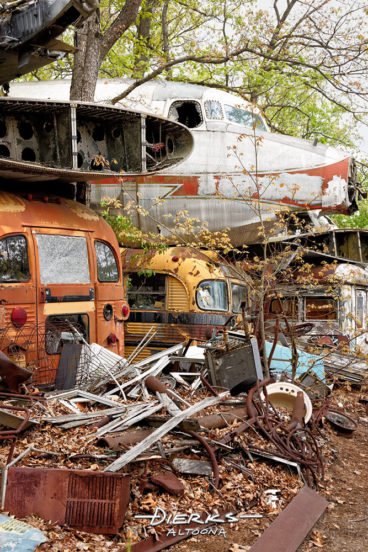 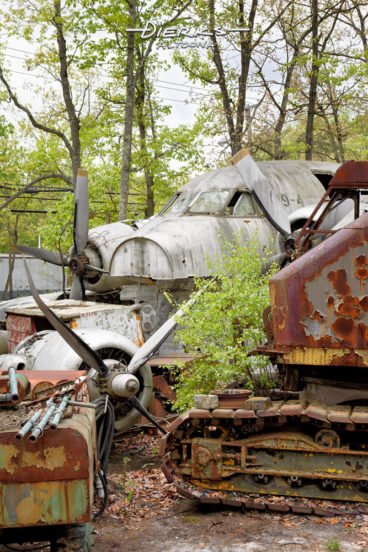