A friend and I had her Arabian mare and foal in a green pasture of high early summer grass. I took many shots of them going around with the foal leading, opposite of what you might expect. The little one kept up a good pace and never walked, always moving. Being a very active kid, the three-month-old baby was actually running her mother a little ragged to the edge of frustration.

To create this image, I stepped right into their path about ten feet away as they came around the paddock in a slow trot. The camera was ready to shoot and the shutter clicked just as the horses reacted to slow and stop. What I was after was a head-on shot with a little twinge of surprise in their pose with ears up. Above all, I do not recommend doing this for obvious safety reasons. Even if you know horses it can be risky. But to get an untypical picture of a mare and foal in motion like this one, that’s what I had to do and it worked.

The setting is one of the very beautiful south-central Pennsylvania farming valleys on a horse farm where I’ve shot many times. Those beautiful tree-covered mountains like the one in the background line each side of the valleys down east. All told, it was a beautiful day to shoot and have friends and horses to work with!

This three-month-old foal with knobby knees is my old pal Allegra. She’s grown into a beautiful mare in her own right and doesn’t look the same at all. Here as a small filly, she’s a rich brown color like her bay mare mother. Today, she is a stunning rose roan as she transitions to a gray horse like her father, the white (or gray) stallion who I’ve photographed many times. Those pictures have appeared in calendars and magazines many times.

Interestingly, there’s a nice shot of this baby all grown-up as Allegra #14370, and another as There She Goes #14437. It’s obvious this girl likes to have fun!

Would you like to see her pure Arabian horse parents? See them here in portrait as Affectionate Horses #12396. 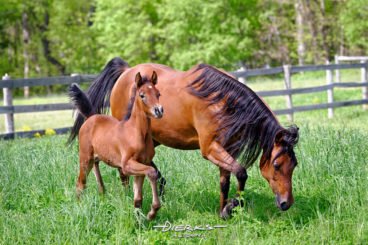 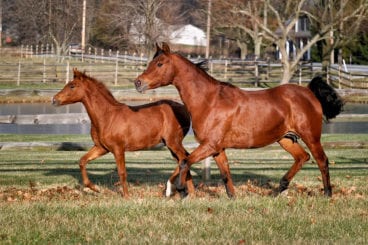