Here are two things that anyone who sews would recognize, an old dress mannequin and lots of colorful spooled thread. This old Wolf mannequin stands in a nearly abandoned old sewing factory that is still used to store auto body parts in the dark watery basement. At one time, this factory in Pennsylvania was once a maker of higher-end clothing with much of it going into European export. It closed years ago along with most of the clothing factories in the country and once had a large payroll of working women laboring at the sewing machines on three floors.

The building was in pretty bad shape being full of pigeons by the hundreds and a completely ruined and very leaky roof. The birds have used this dress form as a perch for years and deeply stained it. However, through the years the shelves acted as a miniature roof to protect the brightly colored spooled thread from rain and pigeons. Today, it wouldn’t be much good but the thread spools remain here in the vivid pastels of decay.

I was able to move the dummy around to make different compositions. Being of commercial grade, this old Wolf mannequin had a heavy iron frame underneath and the time-stiffened casters made the dummy a little hard to move. It was damp and reeked like a bird cage. These things were built to last and did until left to deteriorate here and the entire abandoned sewing factory was pretty grungy from one end to the other.

Once a mainstay in clothing factories and with serious sewing people everywhere, I’ve discovered the Wolf Collapsible dress form company went out of business lately with no reason given. Older used Wolf sewing mannequins can be found out there, but nice vintage ones are in demand for a fairly good price.

From the same shoot, there’s another view of a mannequin pair and more of the ruined factory environment around them. They’re two sisters standing together in the image titled Confidentially Speaking #13951. I also took a few shots of the very wrecked and haphazard foreman’s office on the same floor while I was there: here’s one from the office titled The Maid’s Day Off. 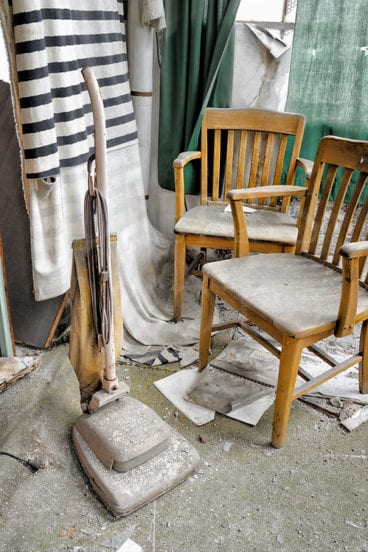 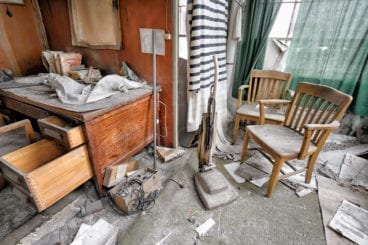