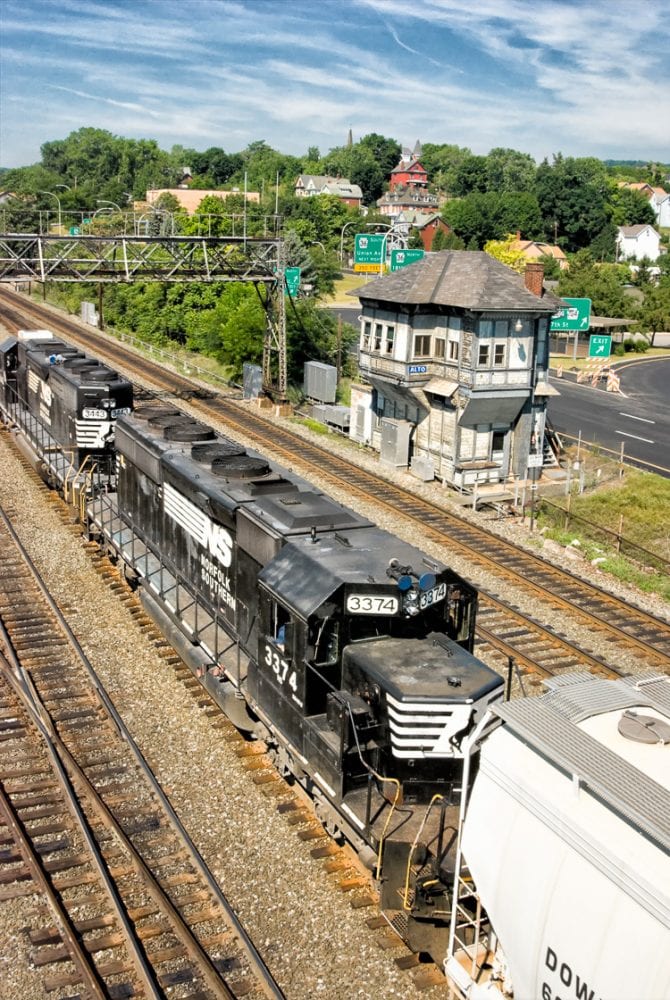 Helper locomotives are common currency around Altoona PA. That’s where trains begin the long climb westbound up the mountain to the top at Cresson, followed by another long grade down into Johnstown. The helpers are there to shove trains uphill eastward from that town too. Hooked on at the rear of the train to push, it’s an up and down, back and forth daily crawl for those engines and crews, but the long, heavy freights could never make it up the grades on their own.

Sometimes the heavy trains can’t make it down the mountain safely on their own either, and that’s when a helper pair will stay attached to the rear and use dynamic braking to keep the train at a safe downhill speed. It’s like using a lower gear in a truck going downhill. That’s what the helper pair in this image is doing, and have nearly finished getting a long freight safely down to Altoona. They’re passing the famous Alto Tower which controlled all the switching in that track section, but is out of use nowadays. It is one of the few remaining buildings built by the PRR that was still in use until recently.

Helpers on the Norfolk Southern in this division are used as coupled pairs, long hood to hood. That way, the crews never need to turn the engines when they need to go the other way…they simply walk to the other cab on the other end. Their base is on the summit of the mountain at Cresson so they can work the grades on both sides easily. These days, helpers on Norfolk Southern are easy to identify by their road numbers which begin with 66, instead of the 33 as shown here which was the former standard. They are always seen in coupled pairs, and most helpers are the heavy locomotives of years past that are smaller than the big modern ones in long road service today.

Equipment: Nikon D80, Nikkor 24-120mm, and some earplugs would have been a pretty good idea…

Up Next: Inside The Blanket Mill