Here stands a miniature replica of the Statue of Liberty holding her torch high above the Susquehanna River at Dauphin, just north of Harrisburg, Pennsylvania. This American icon is far from New York harbor here but perfectly at home watching over this wide water gap that cuts through three large mountains. Even though this place is known as the Dauphin Narrows, the Susquehanna River is still very wide here.

Although many people look for her, this Statue of Liberty can be hard to spot driving down the busy, fast roads on either side of the river. The narrow berms are very unsafe to pull over in high traffic. Driving by at speed, a glance is the best you can get and she is rather small out across the broad river. The 25-foot statue is hard to see out there from most places around it. The broad Susquehanna River here in the Dauphin Narrows is also very dangerous and full of rocky rapids that can’t be seen in the high water in this view. Although the Susquehanna is a shallow river, it can be perilous to approach the statue with a boat, even a kayak.

The solution to getting Lady Liberty’s best portrait: fly. A drone was the best answer. In fact, the only practical one.

Liberty’s footing here is an old railroad bridge pier first erected here in the Dauphin Narrows in 1859. In this downriver view toward Harrisburg, you can see the arches of the famous Rockville Bridge completed in 1904. It carries the Norfolk Southern Railroad mainline today, which was originally the Pennsylvania Railroad.

The Statue of Liberty is probably one of the most recognizable patriotic American icons there is. So the question remains…

How did a replica Statue Of Liberty get in the Susquehanna River in Pennsylvania?

At first, it was a mystery. In 1986 she appeared overnight perched on the old bridge pier in the middle of the river. Of course, her presence immediately attracted a lot of attention and the roads were at a near standstill with gawkers and sightseers from a bit of a local media sensation over it. No one officially owned up to her nearly magical appearance until 2011 because the small group of pranksters kept their secret.

It was 1986 when the first replica Statue of Liberty went up in the middle of the night as a patriotic prank to celebrate the original statue’s 100th anniversary. Seventeen feet tall and made of plywood and Venetian blinds for wind resistance, it wasn’t meant to last but she surprisingly remained standing until 1992 when a storm finally knocked it over. By the time that original fell, local people became attached to having their very own Liberty out there in The Narrows and a fund was started to rebuild her.

Over the next five years, money was raised locally to make this taller and stronger 25-foot version of metal, wood, and fiberglass. In 1997, it was lifted onto the 30×9 pier by helicopter and lashed down tightly. Today, Lady Liberty’s only peril is the crumbling of the old 1859 stone pier that has lost quite a few stones into the river.

There are two other views on this website of this iconic American statue, looking upriver from Harrisburg PA. They were taken the same day as Liberty #1 close-in, and Liberty #3, near sunset. 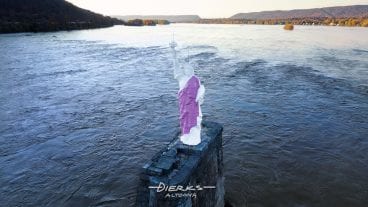