There’s a mile-long hiking trail through the narrow rocky gorge at Watkins Glen. Most of the way, the path is a mere shelf along the high rock walls. The trail crosses several arched stone bridges and many stone steps take you higher and higher hiking to the top. There are over 800 steps altogether! Thankfully, there are guard walls to keep people from falling into the chasm which is very deep in places. From the top of the plateau to the flowing waters of Glen Creek the depth can be as great as 400 feet.

Arched stone bridges like this one carry the path across the chasm. from one side to the other. Of course, they’re built from the native rock like the trail itself. In two places, the trail goes under waterfalls. You’ll be hiking under Glen Creek itself at one point and the other is under a tributary cascading into the glen as seen in Watkins Bridge #14264. Aside from the intimate closeness to nature, the hallmarks of Watkins are the depths, the sound of moving water, and high layered rock walls.

Walking under waterfalls is pretty magical stuff for any foot trekker, but Watkins Glen is a very unique place to visit to begin with being like no other. Hiking the stone path, there’s a rather pleasant and strong feeling of having a special place just to yourself. And oddly enough, I sometimes had the sensation of going through different rooms or galleries in a large house of pure nature as well. The scenery is close at hand because you’re literally in deep and up close, but it unexpectedly changes often in that wet and rocky environment as you hike through it.

Watkins Glen State Park has been a New York state park since 1906. Before that, it had been privately run as a tourist resort since the Civil War. Even long before white men came, Native Americans came here to see and enjoy this natural wonder. This fascinating place has always drawn people for good reason and it’s not hard to understand why. After being through here, you might also understand why John Muir made the ever-clear statement that man needs nature. 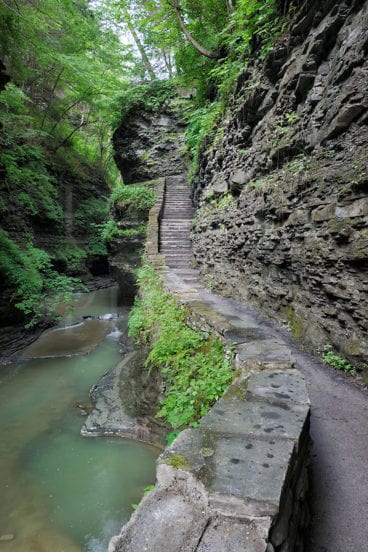